In the heart of the Chianti hills, near the medieval town of San Donato in Poggio, surrounded by the famous vineyards, the Chianti Botanical Park offers a green oasis where the Osservatorio Polifunzionale del Chianti (OPC) is nestled as pearl. This is a professional observatory, active in research, education and outreach, managed by the University of Florence. Both the Park and the Observatory is offering a great place for researchers and amateurs wishing to study the nature and observe the dark starry vault of cosmos through the largest telescope in Tuscany. It is open to conferences, meetings, lectures, practice for students, but also to tourists and visitors: it is a unique recreational-cultural site, where emotions combine with science and culture.

A 75-seats conference room welcomes attendees at the OPC equipped with advanced multimedia facilities. An on-site catering ensures coffee breaks, lunches and any refreshments. The ample surrounding area and the Park offer many spaces for extemporary meetings, discussion and conversation in the tranquility of green and in a relaxing atmosphere. 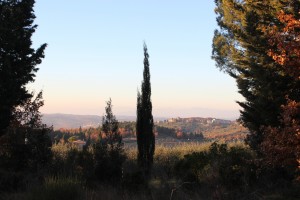 San Donato in Poggio is a small medieval village at the top of a hill about halfway between Florence and Siena. This is Chianti landscape and the roads taking you to San Donato and then on to Greve or to Castellina in Chianti are some of the most beautiful in Chianti, with the rows and rows of vineyards as far as the eye can see mixed in with olive tree orchards, small woods, hamlets, farmhouses and wineries.

The small town of San Donato would be the perfect location in Chianti in which to enjoy a calm and peaceful time benefitting from its medieval heritage. The heart of the town is still surrounded by the defensive walls built in the 12th century and along the western edge a watch tower still stands. The northwestern entrance is called “Porta Fiorentina” (since it leads toward Florence), opening on the main street, Via del Giglio, that has intersected the town since the 12th century. The main square is dominated by Palazzo Malaspina and right next to it is the Gothic church Santa Maria della Neve with its side facing the square. In the center, the octagonal well. On the other side, the Palazzo Pretorio has not conserved its medieval look being less imposing than the facing Palazzo Malaspina.

You can get information at http://chiantitopics.it/location

HOW TO REACH THE OPC

The OPC is located on top the Montecorboli hill, 1.5 km after the town of San Donato in Poggio along the way to Castellina in Chianti.

From the Firenze city center you have to go South to Certosa-Galluzzo and then to the Firenze-Siena motorway.

From the Siena city center you have to take the Tangenziale Ovest north-bound and then the Firenze-Siena motorway.

From the A1 highway you have to exit at Firenze Impruneta and then to take the Firenze-Siena motorway.

The fifth exit of the motorway from Florence and the seventh from Siena is “San Donato” from where you can arrive to the OPC after about 5 km in the direction of Castellina in Chianti.

If you are traveling from Rome, Bologna, Milan or Pisa, get off at Firenze S.Maria Novella railway station. Then, Tavarnelle Val di Pesa and San Donato in Poggio may be reached by bus. From those villages a courtesy shuttle bus will be available to get to the Observatory.